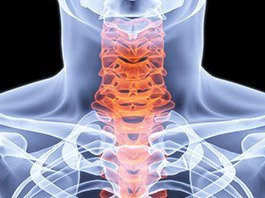 WHAT IS THE CERVICAL SPINE?

The cervical spine is composed of seven bones starting with the C1.  C stands for cervical, and the 1 indicates the position in the series.  C1 is also called the Atlus with a nod to Greek mythology, because just at Atlus supported the world on his shoulders the C1 directly supports the weight of the skull without a disc for cushion.  Each bone counting down from C1 gets assigned a number based on its position in the series;  The bones are ordered C1, C2, C3, C4, C5, C6, and C7.  After C7 the bones are part of the twelve bone Thoracic series.  A disc connects and cushions each vertebrae in the cervical spine.

Cervical discs anatomy is comprised of two components.  One component, the Annulus Fibrosus, is a tough fibrous exterior to keep the discs shape and position.  The Annulus Fibrosus is essentially collagen sheets stacked concentrically inside each other like a Russian nesting doll.  The other component is the gel like center inside of the disc, called the Nucleus Populous, comprised of collagen fibers and a mucoprotien gel.  The Nucleus Populous acts as a internal tension cushioning to oppose the everyday impacts from movement.  The mucoprotien gel inside of the disc is what causes the inflammatory response on nerves when a disc ruptures.

WHAT IS A ANTERIOR CERVICAL CORPECTOMY AND FUSION MEAN?

WHAT DOES ANTERIOR MEAN?

Often in medicine you may hear positioning terms like anterior, posterior, proximal, and distal.  Here are what they mean:

WHAT DOES CERVICAL MEAN

The spine is composed of four sections:

WHAT DOES CORPECTOMY MEAN

Corpectomy broken down into its two parts means body and to remove.  In this case we use the word corpectomy to convey the removal of the entire or partial piece of the vertebral body (bone).

WHAT DOES FUSION MEAN

Fusing means to take two things and make them one.  In the case of orthopedic spine surgery this means metal hardware will attach two or more bones together.

PUTTING IT ALL TOGETHER

This procedure is similar to discectomy, except a larger and more vertical incision in the neck will be required to allow more exposure so that the entire vertebra can be removed.  In some cases, both disc and bone may be pressing on the spinal cord and a combination of discectomy and corpectomy may be performed.  Once the vertebra, disc(s), bone spurs and disc fragments are removed, a spinal fusion is required to stabilize the spine.  Spinal fusion is essentially a “welding” process. The basic idea is to fuse together spinal bones (vertebrae) so that they heal into a single, solid bone.

In addition to bone grafts, metal plates and screws are commonly used to fuse the bones in place. Fusion will take away some spinal flexibility. The degree of limitation depends upon how many spine segments or “levels” are involved.